The paintings of Ghanaian-British artist Yiadom-Boakye (born in 1977 in London) move within the European tradition of figurative painting and illustrate its range of formats. With her expressive representations of the human figure, the artist examines the formal mechanisms of the medium of painting and reveals political and psychological dimensions in her works, which focus on fictional characters who exist beyond our world in a different time and in an unknown location. Nevertheless, they are in no way foreign or strange but, rather almost familiar. They are imaginary and constructed out of set pieces of the artist's personal imagery, from her perceptions and stored templates and are placed against indeterminate backgrounds. The representations thus present no narratives, leaving the viewer space in which to project his or her own ideas into the images. The protagonists are exclusively dark-skinned and thus challenge established norms of Western European figurative painting.

In his work, the American conceptual artist and curator Glenn Ligon (born in 1960 in New York) explores American history, literature, and society as well as the tradition of painting and Conceptual Art. Among his best known works are his series of highly textured text-based paintings, which draw on the writings and speech of diverse figures such as Jean Genet, Zora Neale Hurston, Gertrude Stein, and Walt Whitman and which explore themes such as history, language, and identity. Ligon's motifs range from the Million Man March and the legacy of slavery to coloring books and texts written in the 1970s by the stand-up comedian Richard Pryor, to his treatment of works by Robert Mapplethorpe. In addition to paintings, Ligon's practice also encompasses neon, photography, sculptures, print, installation, and video. 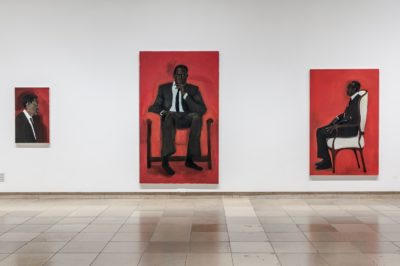