Under the auspices of the exhibition "'Genial Dilletantes'. Subculture in Germany in the 1980s", the bands Ornament und Verbrechen and Die Goldenen Zitronen performed together for the first time. Both bands were founded in the 1980s – one in East Germany, the other in West Germany – and were part of a brief era of artistic upheaval.

Ornament und Verbrechen Ornament und Verbrechen was founded in 1983 in East Berlin by Ronald and Robert Lippok as a platform for art and an open band project. A mixture of genres, including jazz, industrial, and electronic music, characterized the band's style. Homemade instruments and electronic devices were later supplemented by traditional instruments. Ornament und Verbrechen was not permitted to perform publicly in the GDR; their appearances were illegal and took place in private venues. The band followed the developments on the other side of the Wall, however, and found inspiration in bands like Einstürzende Neubauten, Die Tödliche Doris, and Deutsch-Amerikanische Freundschaft. Within the GDR, Ornament und Verbrechen was part of a smoothly-running underground network – unofficial music productions and concert compilations were recorded on cassettes and sold with self-published magazines and artist editions. Starting in 1995, the band's open concept gained notoriety with its projects Tarwater (Ronald Lippok/Bernd Jestram) and To Rococo Rot (Lippok/Lippok and Stefan Schneider) and the band became increasingly productive; their music was appropriated by other artists including Doug Aitken, Pina Bausch, Björk, and Olaf Nicolai. In 2012, Arno Brandlhuber invited Ornament und Verbrechen to participate in his exhibition "Archipel" in the Neue Berliner Kunstverein.

Die Goldenen Zitronen The band Die Goldenen Zitronen was founded in 1984 by Ale Sexfeind, Ted Gaier, Aldo Moro, and Schorsch Kamerun in Hamburg. In the mid-1980s, their fun-punk music was characterized by an amateurish mixture of pop and teen lyrics, rockabilly, and glam-rock pastiche. Their dress ironically broke with punk culture; they appeared in pajamas, bell bottoms, fringed jackets, soccer shoes, kilts, or plastic blouses. Die Goldenen Zitronen opened on a tour with the Toten Hosen, and in 1986 caused a great sensation with their single "Am Tag als Thomas Anders starb", a satirical rendition of Juliane Werding's hit "Am Tag, als Conny Kramer starb". They declined numerous offers by major record labels, and continued to work with independent ones instead. The group has reinvented its musical direction time and again. Since the 1990s, Die Goldenen Zitronen have been pursuing a crossover style situated between punk and hip-hop; since the 2000s, they have been incorporating electronic elements, experimental musical forms, and Krautrock influences into their music. Their latest album, "Who's Bad?", was released in 2013; this summer another album will be released that includes instrumental and English versions of songs from the past three records. The title is "Flogging a Dead Frog".

In cooperation with the Goethe-Institut. 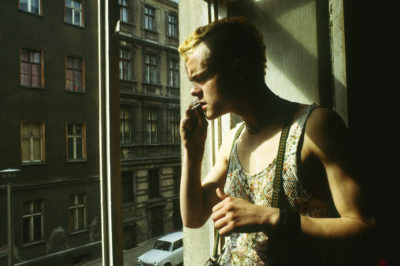