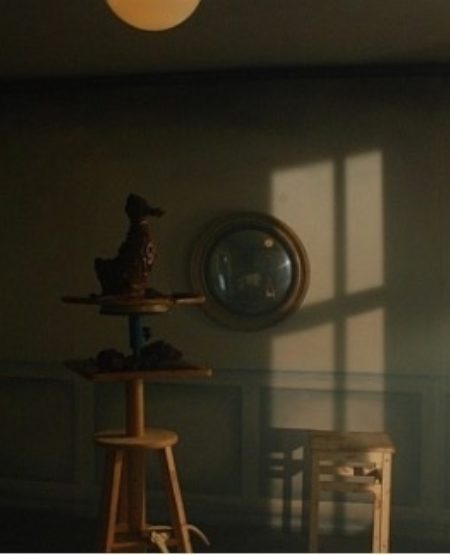 The work "Search Engine" (2008–11) is an expression of Mark Leckey’s fascination with the content of images and the relationship between object and image. His "search engine" allows him to probe as deeply as he wishes into images and to assess this authenticity-conferring relationship.

A digital slide show is presented on a small rear-projection screen. The images show an unpeopled room, into which sunlight falls through two windows on the right side. In the middle of the room rests a molded clay animal sculpture on a potter's wheel. With each new slide, the view delves deeper into the image, whose framed detail increases in size. An convex wall mirror on the opposite end of the room gradually comes into focus. Finally, the camera zooms into the mirror. In the reflection, the viewer’s eye is drawn through the door of an adjoining room, where photographs hang on the wall. The magnification of "Search Engine" only ends when one of the photographs fills the entire screen. Then the process begins anew and is repeated four times, each time with a different animal figure as the starting point: First a cat, then a dog, a duck, and finally a rabbit – and each sequence ends at the same spot in the adjoining room. Only the photograph on the wall changes. The cat sequence leads to a photograph depicting the back view of a woman with a bun; the dog sequence ends with an image of a real dog; the duck sequence closes with a view of the artist's hand holding a photo against the wall, in which one hand is doubled to create a virtual pair of arms. The slide show’s last sequence begins with a rabbit and ends with a picture of a zeppelin. The progression of the enlargement is always the same, so that only viewers who look carefully notice that the initial situation slightly differs each time. And, although the four sequences’ initial and final images seem to presuppose one another, no direct relation between them is apparent.

"Search Engine" is an explicit visual reference to a scene from Ridley Scott’s science-fiction film "Blade Runner" (United States, 1982). In this, the protagonist Deckard uses a special machine to enlarge photographic evidence to expose a replicant. Deckard's analysis machine is able to magnify the image to such a degree that he can look through a round mirror in the image’s background, up in the corner of the depicted room, which previously was not recognizable. And there lies a woman – a replicant – that Deckard identifies, using the picture in order to find and “retire” her. "Blade Runner" thus manifests the dream of technology-based vision – the photo serves as an infinitely accurate picture of reality, similar to how Leckey stages it in "Search Engine". According to Leckey, it is a question of the "ultimate voyeuristic machine".

Thus, a delving into the image occurs – similar to "Made in ‘Eaven" (2004) – that poses basic questions about images and likeness, truth and fiction. In "Search Engine" the artist deals with objects and their reproduction on several levels. In addition to juxtapositions such as the molded clay dog with a photograph of a real dog (i.e. two forms of reproduction) the setting in which the images were recorded also plays with this tension. The location is Leckey’s former studio on Windmill Street in London, a space familiar from other works. However, here we do not see the real apartment. To imitate the zoom, Leckey built a model of the space. In the "Search Engine" projection, the viewer sees a photographic image of the studio space, which, in turn, is a detailed replica of the actual apartment. The clay figures presented in it are, in turn, replicas of animals, similar to those in the photos at the end of the zooms, which are two-dimensional images of supposedly real objects – or more precisely their mirror images. They are an image in an image in an image.

While the analyzed photograph in "Blade Runner" serves as an authentic document of reality, Leckey’s zoom in "Search Engine" testifies to the reality of image manipulation. The work thus deals with the question of how replicas – whether real or virtual – affect us, perhaps even more than an "original" can. The “real” lies just as much in the physical reality of the objects as it does in what we project onto it, i.e. in all fantasies, desires, and memories associated with it. Although the "real thing" at least partially stands for authenticity and truth, Leckey looks with wholehearted fascination at the opposite – at the copies, fakes, and "as ifs". For Leckey, the real and its simulation are closely intertwined. 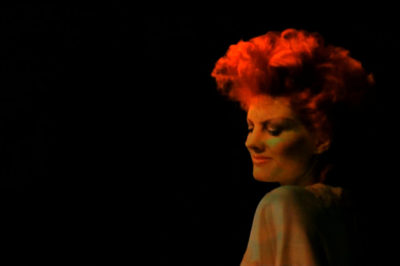