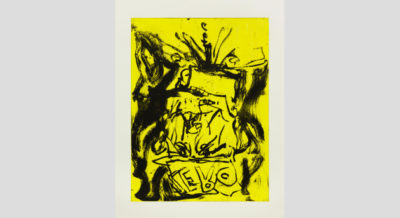 The critical reflection of his own work in a biographical context has always been a key element in the work of Georg Baselitz. In the past decade, the re-interpretation of programmatic works set against a new temporal background has assumed a prominent position, as has the formal analysis of the works by other artists who were influential for Baselitz's own work.

In the context of the exhibition "Back then, in between, and today", Georg Baselitz has created an exclusive colored etching for Haus der Kunst; titled "Willem raucht nicht mehr [Farewell Bill], the print refers to a series of self-portraits created in 2013, in which the artist probes the paintings of Willem de Kooning, particularly with regard to their palette.

As with many of his self-portraits, in this etching Baselitz portrays himself in frontal view wearing a cap inscribed by the word 'ZERO', a word that repeatedly appears in his paintings and sculptures and identifies the image as a self-portrait. In the print, the coarse rendering of the facial features and the forceful style infuse the impulsive energy of his work with a hint of transience.