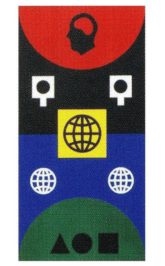 The starting point of Matt Mullican's artistic approach is the examination of the relationship between reality and perception. He explores the human ability to see and represent the world. Mullican (born 1951) aims to organize and structure the perceived world, much in the manner of an encyclopedia. His approach is founded on the idea that anything and everything has value and meaning.

Mullican's artistic creed includes the concepts of "cosmology" and "cartography", where the latter describes a person's life from before birth to after death. With the cosmology presented in his edition "Untitled (Chart)", Mullican structures perception and appropriation mechanisms by which we open up the world. It has five levels, which, in turn, are divided into five colors: Green denotes the level of the "elements". It is the lowest level and includes the realm of nature and the physical properties of things. Blue symbolizes the "World Unframed", the area of everyday objects and automated actions that are recognized without being consciously controlled or reflected on. Yellow is the level of consciously-controlled thought processes and ideas with which the world is perceived, analyzed, and systematized. The science and the arts are located on this level. Black and white represents "language" as an abstract system of communication and understanding through which objects lose their individuality and are understood as images or characters. Red denotes the fifth and highest level of the "subjective"; those spiritual activities that define our individual experiences and realizations in relation to the characters.