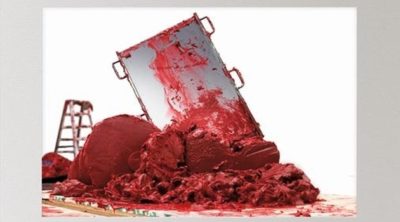 For his exhibition, which was on view in late 2007 in Haus der Kunst, Kapoor created a large sculpture that moved on rails through the building's monumental spaces slowly, almost imperceptably. When passing through the doorways from one room to the next, the massive red block, reminiscent of a train, left traces, evoking an almost apocalyptic image. Such images have intense connotations in a building such as Haus der Kunst, with its often loaded history.

Both the sculpture and the edition are called "Svayambh", which is derived from Sanskrit "svayambhu(v)" and means "self-generated" or "born of itself". With the edition, the artist refers to the sculpture created for the exhibition and, thus, the associated creative process.