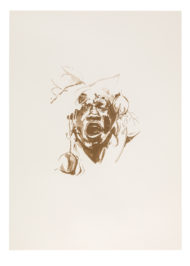 While elements of East African modernism are fused with the history of European art and ideas in the work of British-Kenyan painter Michael Armitage (born 1984 in Nairobi, Kenya)—alongside themes, materials, and artistic traditions from both regions—his pictures also address current social and political subjects with an equally subtle and engaging manner.

In their complexity, the works presented in the exhibition “Paradise Edict” feature universal aspects of what it means to be human: violence, love, sexuality, religion, as well the powerful images of myths and dream states.

The preliminary studies for his works, watercolours and ink on paper that he often creates while in the country of his birth, Kenya, demonstrate the intensity with which the artist concerns himself with representing gestures and facial expressions.

Protestor, 2020 belongs to a cycle of works that was inspired by the controversial 2017 parliamentary elections in Kenya and the subsequent political unrest. At the time, the artist attended the last major rally of the country’s largest opposition party, during which alluring election promises were made and the path towards a better future was laid out. Armitage works through these events, which reflect upon the younger generation’s push for democracy and transparency as well as the generational conflict that was subsequently ignited — in a series of dramatic, sometimes grotesque painterly scenes. By oscillating between real and imagined emotionally-charged, often disturbing visual subjects, the series of works, that was partly shown at the Venice Biennale 2019, points beyond the concrete political events. It confronts us with psychological states in the face of collective forces. 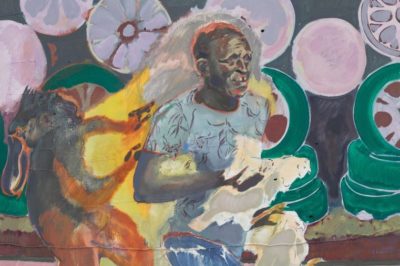