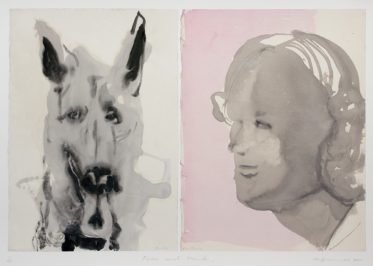 In addition to Marlene Dumas's paintings and "Tronies" drawings, the exhibition displayed a pictorial form that Dutch painters like Rembrandt and Rubens practiced; however, the most famous Tronie may be Vermeer's "Girl with a Pearl Earring". Although they also are based on the living model, Tronies, unlike portraits, do not focus on the representation of a particular person, but explore the spectrum of human physiognomy and the expression of emotion. Against a neutral background, a half-length figure is portrayed whose face is both realistic and expressive. The paintings and drawings by the South African/Dutch artist Marlene Dumas (born 1953) are also concerned with the visible expression of emotions. Her style is different from image to image. At times she uses a brush, other times she squirts paint against the canvas. Still other times she lets watery ink run on paper; or smudges, wipes, or juxtaposes blank areas with those with thickly applied paint. Dumas's themes are basic human drives: Birth, love, sex, suffering, death.

"After the defeat at Stalingrad, he [Hitler] is said to have remarked that he only had two remaining friends, Eva Braun and his German shepherd Blondi". (Ernst Piper, "The undiscovered role of Eva Braun", in: "Der Tagesspiegel", 22.02.2010) 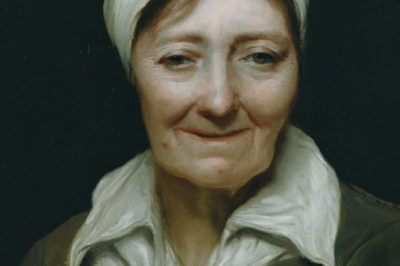