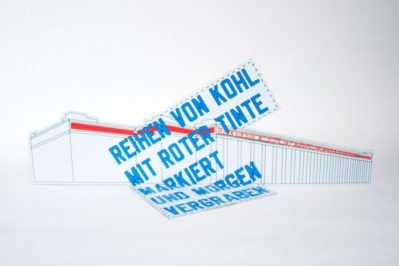 Information about Rows of Cabbage

Cabbage is inexpensive and was therefore often used to feed prisoners in concentration camps. Here, cabbage could metonymically represent those who subsisted on it, i.e. the Jews. Thus Wiener's text tells of the extermination of the Jews during World War II: Whoever eats cabbage today will be buried tomorrow in rows, bleeding, in a mass grave. This interpretation could be suggested by the text sculpture's installation location. After all, Haus der Kunst, which opened in 1937, was the showpiece of Nazi art and cultural policy. The edition depicts the words of Weiner's text sculpture against the silhouette of Haus der Kunst as a silkscreen print on iron. We confronted Weiner with this interpretation, and asked him whether his Jewish background played a role in this work. His answer was neither yes nor no, but, rather, "perhaps".