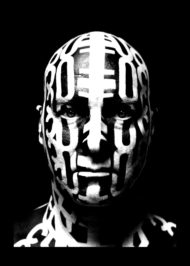 The provocative art of Kendell Geers (born 1968) is influenced by the explosive political climate in South Africa during his youth, and the harsh realities of the street. His uncanny ability to shock viewers with  grim humor and political provocation has led him to an art that deals with the entangled history of Europe and Africa. Geers describes himself as an "ideological hybrid": As a child of a white working-class family, Geers learned early on about the influence of faith, politics, and ideology. When he was 15, he joined the antiapartheid movement. Based on this experience, he developed an artistic piece that connects the private with the political and poetry with misery.

The edition "FF.V.II." is rooted in a central theme of the artist's work: For more than 25 years, Geers produced self-portraits, both in the classical sense, and in terms of its identity as a white man living in South African society. The photograph shows Geers' face painted in black and white. The patterns on his face represent South African folk art; on closer examination, however, it becomes clear that the letters form the word "fuck". "It's one of the last words that still has power and is still magical. Nowadays even perfumes are called 'revolution' or 'manifesto'. Words have become obsolete and provoke nothing – except 'fuck'. It etches, it is alive, it has survived." (Kendell Geers) 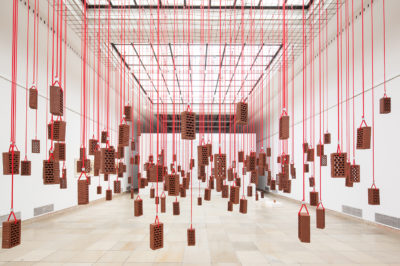