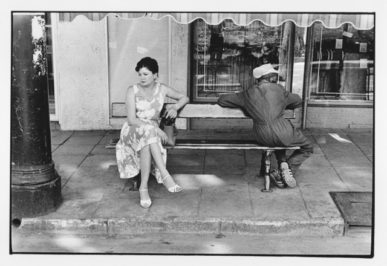 Curated by Okwui Enwezor, the exhibition "The Rise and Fall of Apartheid" (15.02-26.05.13) provided a comprehensive overview of the visual representation of apartheid in South Africa. Beginning with the civil rights movement of the 1950s, through the formative influence of apartheid on South Africa's identity from 1948 to 1994, to Nelson Mandela's rise and the aftereffects of racial segregation on society, the images illuminated the aesthetic power of the documentary form. From the photo essay to the documentary, and social documentary photography to photojournalism, the exhibition explored the legacy of apartheid and its effects on daily life in South Africa.

The edition by the South African photographer Gideon Mendel (born 1959) is part of his "Living in Yeoville" series, which was presented as a slide show in the exhibition. In it, Mendel documented the life in Johannesburg's Yeoville district, which became a center of the antiapartheid movement in the 1980s and represented a liberal microcosm in which both black and white citizens lived. Mendel's essay-like series should be read against the background that, after the declaration of martial law in 1986, it was no longer permitted to photograph political protest and violence. From this point on, Mendel devoted his efforts more vigorously to depicting the everyday encounters between blacks and whites in public space in and around Yeoville. By documenting the brief, often intimate moments, he tried to explore how one led a daily life between the barriers of apartheid.