About "Sunken Cities, Floating Skies", "The Rain Dancer" and "Esel"%

Music plays a special role for Cyrill Lauchauer and can be a work’s main component, a driving force or an assistive accompaniment. Listen to his sound productions "Sunken Cities, Floating Skies", "The Rain Dancer" and "Esel" in this audio post.

In his work, Cyrill Lachauer explores the entire array of artistic media, creating installations consisting of films, videos, slide projections, audio works, photographs and texts. Music plays a special role for Lauchauer and can be a work’s main component, a driving force or an assistive accompaniment. The exhibition "Cyrill Lachauer. I am not sea, I am not land", which the artist developed as a site-specific, new work for the Sammlung Goetz in Haus der Kunst, demonstrates this fruitful interaction between various media. Like many of Lachauer’s works, it was created in cooperation with other artists, who are a friends, companions or confidants of the artist and who are connected to one another through a complex network of working relationships. One such collaborator is the artist and DJ Moritz Stumm, with whom Lachauer founded the label "Flipping the Coin" in 2011, which produces books, films and collectors’ editions with audio material by visual artists. For the exhibition in Haus der Kunst, the two artists created the audio for the video films "Sunken Cities, Floating Skies", "The Rain Dancer" and "Esel". The complexity of their collaboration is particularly evident in the film "Sunken Cities, Floating Skies", which includes a close-up of the famous painting "The Land of Cockaigne" by Pieter Brueghel the Elder from 1567. The film begins by zooming into the picture in a half-hour tracking movement and ends with a black screen.

The film is accompanied by the text "Sunken Cities, Floating Skies", which the artist wrote during a trip from Florida to New Mexico aboard freight trains. The text tells of encounters with marginal people, failed desires and places of decline. These stories are mixed with autobiographical experiences with visions and dystopian ideas about the future. Moritz Stumm developed a sampling composition for the text together with Lachauer, in which fragments of existing pieces of music are mixed with ambient noises, such as the whistling of a locomotive or the rattling of railway wagons.

The films "The Rain Dancer" and "Esel" belong to a group of works of cultic dances that follow the idea of entering into a connection with nature through movement, music and ritual. Moritz Stumm has composed his own soundtrack with electronic music for each of these two films.

"Cyrill Lachauer. I am not sea, I am not land" here, can be found Information on the exhibition. More sound recordings on our Spotify or Soundcloud channel. 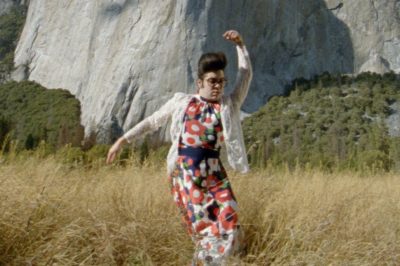