Since 2007, artist Matthew Barney has been developing River of Fundament in collaboration with the composer Jonathan Bepler. The Gesamtkunstwerk is inspired by American author Norman Mailer and his sprawling, controversial novel Ancient Evenings, published in 1983. The project comprises the epic-length symphonic film River of Fundament, three performances, fourteen large-scale sculptures weighing up to twenty-five tons, drawings, photographs, storyboards and vitrines. In its entirety, the project is one of the artist's most complex and ambitious works to date.

River of Fundament  represents the culmination of seven years of intense meditation on death, rebirth, transformation and transcendence. Mailer's novel depicts the spiritual path of the Egyptian Menenhetet I through three deaths and rebirths. Barney replaces the man's soul with the automobile and reincarnation with recycling: "Ren," the project's first act, documents a live performance in a car dealership in Los Angeles in 2008, where the car – the 1967 Chrysler Crown Imperial from "Cremaster 3" – undergoes its first death. The second act, "Khu," which is also the second part of the film opera, is set in Detroit and brings the Chrysler back to its birthplace, reincarnated as a 1979 Pontiac Firebird Trans Am. In "Ba," the automobile's soul travels to New York, where the myth materializes as a sculpture.

With this project's sculptures, Barney has moved away from his signature materials: Instead of thermal plastic and petroleum jelly, references to Egyptian mythology are made with iron, bronze, sulfur and salt . The central question is if there is a coherent identity, a spiritual property retaining a person's particular characteristics not just throughout life, but surviving physical death. The sculpture Djed at the center of the exhibition was cast during a live performance "Khu." For this work – witnessed by a live audience – twenty-five tons of molten iron were poured over the chassis of the Chrysler. The work shares a formal similarity with the Djed pillar, the Egyptian hieroglyph representing eternity and stability and that was later absorbed into the cult of Osiris, the god of death and fertility. Other sculptures and their complex production process were part of the live performances and thus are part of the film River of Fundament . The new drawings, photographs, storyboards and vitrines intricately map the character and thematic development of the project.

Video for the installation of Matthew Barney's complex exhibition "River of Fundament" at Haus der Kunst. With interviews by Matthew Barney and team. A film by Felicitas Sonvilla and Lion Bishop.

The film was created as part of the cooperation between Haus der Kunst and the Department of Documentary Film and Television Journalism at the University of Television and Film (HFF), Munich. 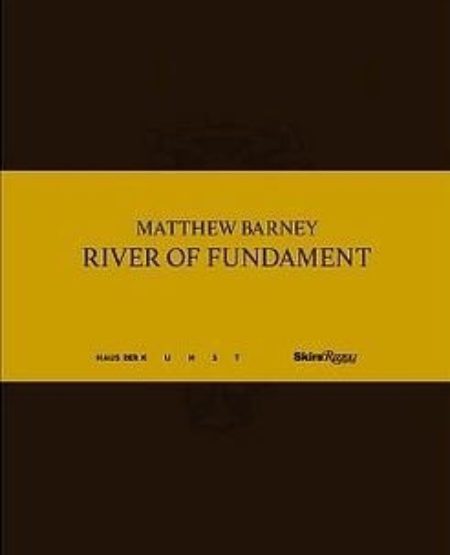