Markus Lüpertz (*1941) is one of the most highly acclaimed artists working in Germany today. His paintings have played a decisive role in the international art scene since the 1960s. The exhibition “Markus Lüpertz. Über die Kunst zum Bild” ("Toward the Image through Art") sheds light for the first time on the meaning of the serial character of Lüpertz’s art. The more than 200 paintings and drawings, many of them from collections worlwide, reveal not only how deeply interconnected his oeuvre is, but just how much it is informed by a cinematic manner of looking at the world. The result is a completely fresh look at Lüpertz’s artistic oeuvre, which also demonstrates just how much his work is devoted to revitalizing the age-old medium of painting.

Initially Lüpertz admired not just Westerns of all kinds, but particularly those made by John Ford. He also enjoyed watching auteur films taking distinct pleasure from those directed by Michelangelo Antonioni, Jean-Luc Godard and Alain Resnais. All of them largely dispensed with storytelling, intent instead on capturing the abstract quality of their character’s inner states, private longings and poetic visions.  By the end of the 1960s their “film poems” would help Lüpertz break through to a radically new syntax of painting, whose possibilities  the artist has continued to build upon right to the present day. From the beginning Lüpertz made series’ of images, a principle not only at the fundament of his oeuvre but one that according to the artist had  its origin in film. The show, which is curated by the American art historian Dr. Pamela Kort, is the first to bring the significance of Lüpertz’s serial manner of working into focus.

Two artistic phases are at the core of the exhibition: the time period between 1963 and 1980 and the one extending from 2000 to today. The show begins by zooming in on Lüpertz’s series of Donald Duck (1963) and “Dithyramb” (c. 1964–1972) drawings and paintings. Many of their motifs were inspired by the Twentieth-Century-Fox logo. Albeit it these partly abstract works preclude any rapid identification of that trademark. While his “Tent” canvases – which will also be on view – may not have been inspired by cinematic motifs, they suggest a zone beyond the confines of known time and space, that we so often encounter in auteur films.

After the Second World War, in West Germany modernity was regarded as an open beginning. During this time of discontinuity, artists of the period endeavored to establish bridges to history and tradition. Many developed new, abstract forms of artistic expression in the form of an objective epic. But Markus Lüpertz and his painter friends deliberated a figurative approach that triggered a great contradiction and was considered reactionary in West Germany. In 1965/66, for example, Georg Baselitz began his series „Heroes“, in which he depicted soldiers and painters as anti-heroes. Between 1968 and 1970 Markus Lüpertz executed his helmet series, as well as monumental paintings such as „Westwall“. Today these works are to be read as a prelude to a group of works for which he became famous at the age of 30: the so-called German motifs: vibrant compositions, which drew inordinate attention to symbolically laden objects of agonizing memories of war and guilt of the Nazi era, and which demanded an examination of German history.

In the 2000s a change occurred in Markus Lüpertz’s work. Many of the figures populating his paintings now possessed a sculptural quality; they refer to Alain Resnais’s 1961 work „Last Year in Marienbad“ - a film of sculptural-artistic quality. Nude, antique-looking figures demonstrate Lüpertz’s dialectical relationship between painting and sculpture and illustrate his fellowship with picturesque aesthetics. They transport his paintings into the surrounding space.

Though not a retrospective, the exhibition attempts to keep pace with Lüpertz’s decidedly non-dogmatic painting, which transcend medium-specific boundaries in the interest of attaining images with the same kind of staying power as those we encounter in the cinema.

The exhibition is made possible thanks to major funding by Erich Obermaier, entrepreneur from Munich. We further acknowledge the significant support by the Foundation Almine y Bernard Ruiz-Picasso for Art; and the generous contribution of Almine Rech Gallery. Our sincere gratitude also goes to our partners Bouvet Ladubay, Rischart and Bayerischer Hof likewise to our media partners Monopol and Süddeutsche Zeitung. 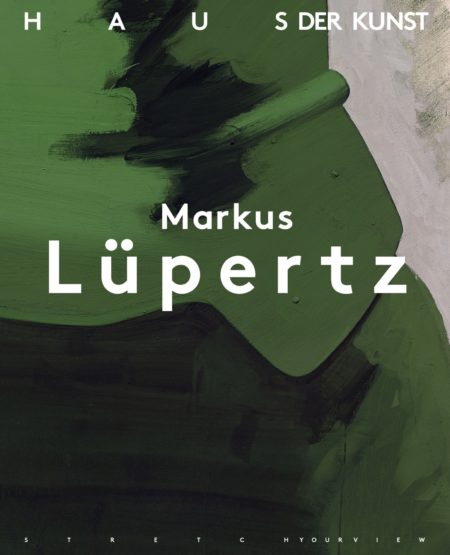