Ellen Gallagher (b. 1965) brings together imagery from myth, nature, art and social history to create complex works in a wide variety of media, including painting, drawing, relief, collage, print, sculpture and film.

Through a painstaking process of obscuring and layering she transforms imagery from an eclectic range of literature, music or advertising until only traces of them are left visible through a veil of inky smudges, punctures, stains and abrasions to suggest a strange and unsettling imaginary world.

In 1986 Ellen Gallagher spent a semester aboard an oceanographic research vessel examining the migratory patterns of pteropods – microscopic wing-footed snails – and drawing them. In a series of watercolors she recalls these studies of natural history ("Coral Cities," 2007). The people of "Drexciya" represent the main inhabitants of this series. Drexciya is a mythic black Atlantis at the bottom of the Atlantic Ocean founded by pregnant African women who leapt or were thrown from slave ships during the Middle Passage and gave birth to offspring capable of breathing underwater. Gallagher populates her canvases with women protected by Afro wigs made of vibrant sea creatures and marine flora; women with flowing coral hairs; and jellyfish-like figures with African faces. For Gallagher, the overboard, drowned slaves are carriers of ideas of regeneration and trans-historical nation. As an Exodus narrative, Gallagher's watercolours are not simply about escape but about the New Land, new beginnings, new identities formed in the context of emancipation.

Ellen Gallagher took the New York art world by storm in the early 1990s with a series of beautifully balanced, deceptively minimalist paintings such as Oh! Susanna (1993), Oogaboogah and Pinocchio Theory (both 1994). In another series of works, she used advertisements for wigs and other commodities as well as feature articles from black-oriented magazines like Ebony, Our World, Black Stars, etc. One of her most intriguing works consists of a grid of twenty female wig models of various skin shades set against a vast white background. The wigs are meticulously cut into elaborate shapes and float on paper as if embossed.

Beginning with Preserve (2001), the works show accumulations of eyes, lips and spores constructed with plasticine and paint and boxed in alongside the advertisements. The ads also became the basis for a series of five monumental works comprising 396 portraits laid out on a grid, among them Pomp-Bang (2003), referred to by Ellen Gallagher as the "yellow paintings." The grid allows for nonlinear, random reading, inviting the viewer to imagine intersecting narratives.

This survey exhibition takes an overview of Gallagher's practice, exploring the themes which have emerged and recurred from her seminal early canvases to her "wigmap" grid collages, through to recent film installations and new bodies of work.

Organized by Tate Modern in association with Sara Hildén Art Museum, Tampere and Haus der Kunst, Munich. With thanks to Gagosian Gallery and Hauser & Wirth for their support towards the Ellen Gallagher: AxME international tour.

We thank Bayerische Hausbau GmbH & Co.KG for their generous support as principal sponsor of the exhibition at Haus der Kunst. 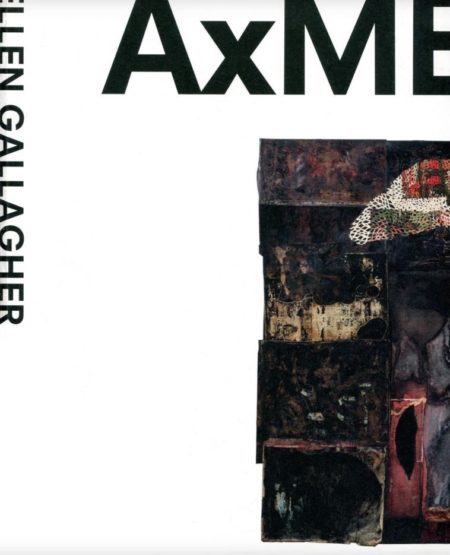