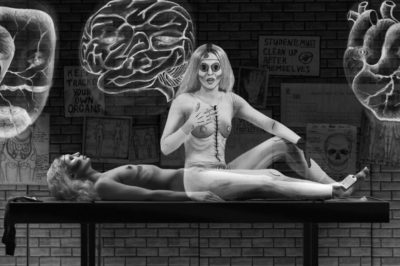 The (After)life of the Cyborg: On the past, present, and future of human-machine interactions

11.00 am
Welcome and Introduction by Daniel Milnes

The (After)life of the Cyborg: On the past, present, and future of human-machine interactions

Despite being published more than three decades ago, Donna Haraway’s seminal text A Cyborg Manifesto (1984) remains a key point of reference for artistic inquiry. The one-day symposium The (After)life of the Cyborg: On the Past, Present and Future of Human-Machine Interactions at Haus der Kunst brings together artists and theoreticians with a view to explicating the relevance of the Cyborg in contemporary society. While technological advances in robotics, artificial intelligence, and augmented/virtual reality may make the Cyborg look like a very real prospect, the utopic social vision for a new form of subjectivity proffered by Haraway, which called for a more permeable approach to the established binaries of man and woman, self and other, nature and culture, remains as yet unrealized.

Organized as part of the exhibition "Blind Faith: Between the Visceral and the Cognitive in Contemporary Art", the symposium looks at how the historical image of the Cyborg, as presented by Haraway, compares with the social, political, and technological realities of the present moment. Consisting of a keynote speech by Francesca Ferrando, a performance by Lili Reynaud-Dewar, and a presentation by Cécile B. Evans on her work Sprung a Leak (2016), The (After)life of the Cyborg offers a multi-disciplinary examination of the relevance of the Cyborg in the age of technological  mediation and digital capitalism. While Evans’ installation explores the influence of human-machine and machine-machine interactions on our emotions, Reynaud-Dewar’s project TEETH GUMS MACHINES FUTURE SOCIETY (2016) redefines the grill-the metallic dental prosthesis with roots in hip-hop culture-as an integral part of the utopian Cyborg body that harbours the power to transcend boundaries of race, class, and gender. These artistic positions are underpinned by a presentation by Francesca Ferrando who traces the Cyborg’s lineage into the present day and beyond, reflecting upon the challenges and revisions it has encountered in the face of technological and social change. The symposium will end with a panel discussion between all the participants.


Cécile B. Evans originally studied drama at New York University’s Tisch School of the Arts, New York, before engaging with visual arts. Evans is the recipient of numerous prizes and has presented solo exhibitions at the Castello di Rivoli, Museo d’Arte Contemporanea in Turin, Museum M in Leuven, Kunsthalle Aarhus, Tate Liverpool, Kunsthalle Winterthur, and the Serpentine Galleries in London. In 2016, Evans participated in the 9th Berlin Biennial and the Moscow Biennial of Young Art.

Francesca Ferrando, Ph.D in Philosophy, M.A. in Gender Studies, is a philosopher of the posthuman; she teaches Philosophy at NYU, Program of Liberal Studies. Dr. Ferrando has published extensively on the topic of Post- and Transhumanism, she was awarded the Philosophical Prize "Vittorio Sainati" with the Acknowledgment of the President of Italy; her book “Philosophical Posthumanism and its Others” is coming out in English by Bloomsbury Publishing. In the history of TED talks, Dr. Ferrando was the first speaker to lecture on the subject of the posthuman. US magazine “ORIGIN” named her one of the 100 Top Creatives making change in the world. She is one of the founders of the NY Posthuman Research Group. For more info:www.theposthuman.org.

Lili Reynaud-Dewar studied public law and ballet before studying art at the Ecole Régionale des Beaux Arts in Nantes. In 2003, she graduated with an MFA in Fine Arts from the Glasgow School of Arts. She also began writing critical texts during this time. Reynaud-Dewar’s solo exhibitions have taken place at the Museion in Bolzano, the Kunstverein in Hamburg, the Contemporary Art Museum in Saint Louis, the 21er Raum at the Belvedere in Vienna, and at Kunsthalle Basel, among others. Her works have been part of numerous group exhibitions including significant biennials, such as the 5th Berlin Biennial “When Things Cast No Shadow” (2008), La Triennale at the Palais de Tokyo in Paris (2012), Lyon Biennial (2007/2013), Marrakech Biennial (2014), and the 56th Venice Biennial “All the World’s Futures” (2015).

Professor Jennifer Parker-Starbuck is Head of Department of Drama, Theatre and Dance, at Royal Holloway, University of London.
Her work has focused upon the historical and theoretical implications of new media/multimedia and its relationship to the body in performance. This work with multimedia has expanded to include works on cyborg performance, trauma and memory in performance, dis/ability in performance, feminism, live art practices, and animality and the non-human. She is the editor of Theatre Journal and author of Cyborg Theatre: Corporeal/Technological Intersections in Multimedia Performance (Palgrave Macmillan, 2011, paperback 2014), Performance and Media: Taxonomies for a Changing Field (co-authored with S. Bay-Cheng and D. Saltz, University of Michigan Press, 2015), and co-editor of Performing Animality: Animals in Performance Practices, (Palgrave, 2015). Her “Animal Ontologies and Media Representations: Robotics, Puppets, and the Real of War Horse” (Theatre Journal, Vol. 65, Number 3, October 2013) received the ATHE 2014 Outstanding Article Award. Her essays and reviews have appeared in Theatre Journal, PAJ, Women and Performance, Theatre Topics, International Journal of Performance Arts and Digital Media, and others.