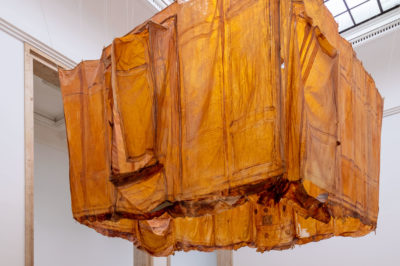 On the day of the event you can follow the symposium on the Haus der Kunst website.
No ticket is required for this online event.

On the occasion of the retrospective Heidi Bucher. Metamorphoses, Haus der Kunst and The Estate of Heidi Bucher are holding a full-day digital symposium on the life’s work of Heidi Bucher. The symposium will include the premiere of Music for Bodyshells by Nik Bärtsch, an interview with the artist’s sons, a screening of archival films, some of which has never been shown before, as well as three panel discussions with international scholars and curators. The symposium traces Bucher’s performative discovery and emancipation of the sensual, sensitive body in the twentieth century.

In the first latex skinning actions of the 1970s, Bucher’s future preoccupation with the human body and the psyche manifested itself in the context of both private and public living spaces, as well as of social and gender norms and their conditioning. With the latex skinnings executed under enormous physical exertion – first of places related to her own biography and later of historically charged, public buildings – Bucher transferred psychic processes onto the material. Her interweaving of different media resulted in a play with the presence and absence of the body as a medium and it being a centre of a material and sculptural transformation.

The first room skinnings were comprehensively recorded in photographs and on film. In addition to sketches and notes, Bucher also wrote instructions and action sequences of her work processes. The archival documents, many of which have been published for the first time, reveal that collective participation and media recording are essential components of her work. This artistic practice and radical notions of body and space transformations allow for a multifaceted play of ideas for alternative social designs in the present.

The Heidi Bucher Symposium is dedicated to her multimedia practices and emancipatory themes and aims to make an essential contribution to the exploration of her artistic concerns.  Bucher’s role during the societal changes of the post-war period as a main protagonist – albeit largely overlooked – of the international neo-avant-gardes, as well as her significance regarding contemporary body politics, are the focus of the event.

Indigo Bucher and Mayo Bucher, The Estate of Heidi Bucher

11:30 am
Mayo and Indigo Bucher in Conversation with Jana Baumann

A review of the life’s work of Heidi Bucher together with her sons, who represent the artist’s estate, opens up new insights into her artistic work. The conversation will shed light on the artist’s archive and its contents, as well as their significance for the development of the exhibition.

In the 1970s, Heidi Bucher addressed spatial manifestations of social relations and repressive orders, the overlapping of one’s own space and external space – of (spatial) conflicts. How did her Bauhaus-influenced education or her various stays abroad, especially the several years she spent in Los Angeles, lead to the processual and emancipatory strategies of her main work?

What impact did her encounters at the time with the feminist Womanhouse, her friendships with Ed Kienholz and Hans Namuth, as well her admiration for Eva Hesse have on Bucher’s concept of work? While feminism opened up a counter-position to modernism in the United States, Bucher increasingly worked beyond gender stereotypes. She addressed the body as a comprehensive, holistic sensual experience. Bucher’s significance will be taken up retrospectively in view of her sculptural and performative fusion of the organic and the static in the context of the international avant-gardes.

The video footage is of a wide variety of skinning actions from the 1970s and ’80s, recently rediscovered and restored for the retrospective. The films feature Bucher carrying out performative gestures and movements that seem to merge with the works and their surrounding space. Her body conveys an impression of vividness in the scenes, whereby, in many cases, she intensely focuses on the imagined viewer. A direct relationship to the audience, Bucher’s own personal presence, as well as a diversity of media prove central to her skinning actions.

Filmic and Performative Practices as a Dissolution of the Boundaries between Media:
Bucher’s Body and Space Sculptures

What is the relationship between Bucher’s skinning actions and their filmic recordings? Does it aim at a moment of community building with the viewers in order to share a bodily experience? Bucher directs the viewer’s attention to the body in space, which is subjected to dynamic relationships and into which experiences, emotions, and affects are inscribed. The presence of the artist’s body is indispensable, while the viewers can also relate to the action with their own perception at a later time.

Bucher achieved autonomy in the spaces where she was once incapable of taking action – and thus experiences self-empowerment. The unrepeatability of the action, beyond its medial recording, ultimately led to site-unbound, space-consuming installations. Her sculpture embodies both architecture and body at the same time, whereby their own conditions and reception are up for discussion.

Sensual Concepts of the Body and New Forms of Life:
The Skin as an Interface to the World

Reminiscent of oversized membranes, Bucher’s latex skins symbolize body politics in that the respective space inscribes itself into the material with its social definition and history. Bucher aimed to counteract an alienation of the body. Already with her early genderless sculptures, the Bodyshells, she dedicated herself to autonomous forms of life.

With her skin-like installations, Bucher allowed the interdependencies of communities and the painful perception of the self as distinct from collectives to emerge. To what extent did Bucher oppose notions of natural conditions as a legitimation for social realities? Did she unmask and overcome the body as a projection surface of social heteronomy, and if so, what new possible forms of coexistence does her art propagate?

Out of Bucher’s initial fascination with an interplay between art and fashion, genderless body sculptures began to emerge in California in the early 1970s. The wearable and danceable body sculptures she called Bodyshells celebrate her concept of sculpture between performance and object, fusing sculpture, architecture, design, and dance. For their presentation in this exhibition, the sculptures have been reconstructed for the first time since 1972.