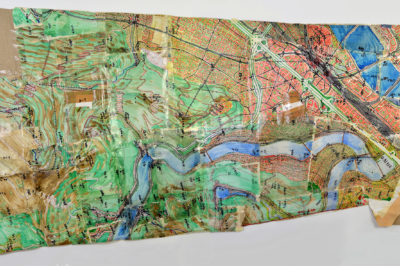 “The reality of which we can speak of is never reality in itself, but (...) a reality we have created.”
Werner Heisenberg

Athosland is a very fertile, sunny, free and large country. It is an imaginary place that alternates between reality and utopia, anarchy and an alternative way of life. It is a world in which you meet real people and fictional beings, a place where the dead come to life again and where “fearful teeth” free the inhabitants of oppressive dreams.

Yet, Athosland is also a metaphor for the power of the imagination. Michael Golz (*1957) has been sketching, mapping and describing this universe since 1974, compiling his visions in a constantly expanding map. In 2018 he was awarded the euward for his life project, the first art prize of international standing for art in the context of cognitive impairment.

On the occasion of the new exhibition “Archives in Residence: euward Archive,” Luisa Wöllisch (actress at the Freie Bühne Munich and the Münchner Kammerspiele) and Benito Bause (actor at the Residenztheater Munich) read from Michael Golz’s texts about “Athosland.”

All tickets are booked. It is only possible to attend the opening with a ticket due to the limited number of participants.