The Brussels-based collectors Herman Daled and Nicole Daled refuse to perceive art as decoration and to, thereby, exploit it. They approach art in a fundamentally different way: Basis for their activities are their relationships and conversations with artists.

In keeping with the aim of Conceptual Art that places the intellectual content of a work above its realisation, they consider themselves not collectors but communicators and producers: They provide artists with the opportunity to also realise works outside of established market mechanisms. Their intense engagement with Conceptual Art, one of the most important movements in recent art history, goes far beyond usual collecting practices. This is not only apparent in the actual works, but also in the meticulously archived documents containing actions and works.

One of the most important influences for Herman and Nicole Daled was Marcel Broodthaers; more than 80 of his works are in their collection. Moreover, the collection holds several works by Daniel Buren, Dan Graham, On Kawara, Sol Lewitt, Niele Toroni, Lawrence Weiner, Cy Twombly and many more.

The exhibition at the Haus der Kunst concentrates on the period between 1966 and 1978, thereby providing a lively portrait of the progressive, international art scene at that time. 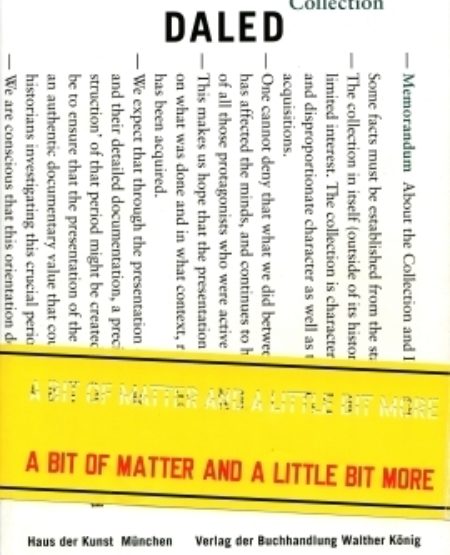